Jim, Mattie, and I recently got back from our 9 day trip to California. This trip has been in the making for the past year. The main ABM Center is in San Rafael, just north of San Francisco. Since starting ABM 15 months ago, I knew that we just had to go out there to meet Anat, the founder of ABM, and her top practitioners. This trip was made possible by all of YOU! All 10 ABM sessions and lodging were paid for with donations made to Mattie in the past 6 months. This trip happened because of the amazing outpouring of love and support that had been shown towards Mattie.

Here is a recap of our amazing trip:

I am catching up on emails as I wait for Mattie to wake up from her nap. We have been in CA less than 48 hours. Last night Jim was in the tub with Mattie giving her a bath. Since we could not bring our special bath tub across the country, one of us has to get in the tub with her to hold her up. This is always uncomfortable and scary for her since it is awkward positioning and she has to rely on us to make sure she is supported. As I am washing and Jim is holding, I glance up at Jim. He had been looking at me. He says “how did we get here?” I give him a half smile and don’t respond. There was nothing to say. The answer is in our eyes, in our heart, and soul and only we can see it. Traveling around the country to get the help Mattie needs has been a constant normal for us. Every penny we save goes to fund these trips. They are not trips meant for fun but the sole purpose of these trips is to give Mattie the ability to move, walk, sit, stand, and run. Something I used to take for granted. We have a mission. We will do everything in our power to help her become the best she can be, no matter the sacrifice. I have come to understand that is the true meaning of selfless love.

We had an opportunity to walk the streets of San Francesco yesterday. Both of us saying how much fun it would be if we came back, just the two of us. I tell Jim that I could never come back without Mattie knowing the ABM center is just 30 minutes away. Then Jim says he believes that one day when we retire, we will be back and Mattie will be independent and we can go on real vacations not therapy trips. Then he asks if I feel the same way and I tell him “I never thought about it”. I tried, at that moment, to imagine it. A time with no kids, no therapy, being carefree and… I couldn’t picture it. Then I realize that I have become so consumed with helping Mattie, that I forget what life would be like if it were… ok I am not going to go there since that is not reality, so I made a mental note to add San Francisco back to the bucket list and another note to go on a much needed adult get away very soon! 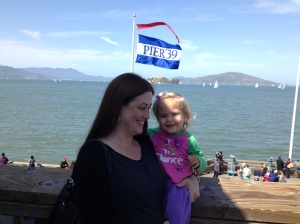 We headed down to San Jose later that afternoon. This would be our 2nd city on our ABM trip. Mattie’s first 2 sessions would be with Andrea Bowers. I was very excited to finally meet Andrea. She often posts great articles and awesome advice on the ABM FB group and her site. She had a son with CP who is in his 20’s so she always has great insight about being a special needs mom in conjunction with doing ABM. The 2 sessions went great. Mattie seemed to really like Andrea and we saw some great movement come out of these 2 sessions.

After the sessions were over we hopped in the car and headed to our final city, San Rafael. We were able to get a great deal on a rental house, thanks to the owner being very kind and generous. The house was going to be the perfect place to spend the rest of the week. Mattie would have her own room, be able to roll around and get lots of floor time. Jim and I would be able to cook dinner every night (a BIG money saver) and just hang out and catch up on life, since Mattie’s bed time is 7pm.

The next morning we headed to the ABM Center. I was not sure what to expect, but I knew I was really looking forward to meeting everyone!! As we waited in the lobby for our first sessions, Anat Baniel came out of a room and introduced herself to Mattie. I was very excited to finally be able to meet the woman behind the AB in ABM and who we have entrusted with helping Mattie learn to move. We would have 2 sessions with Anat later this week!

Sylva and Neil were our practitioners for our first day at the Center. They were both fantastic and Mattie seemed to really like them. By the time the 2nd session was done, Mattie was toast. She went to bed at 6:30pm she was so tired from all the learning. So far 4 sessions out of 10 were completed and we both were very happy with the progress and changes we were seeing in Mattie. Yea!!!! Now what were Jim and I going to do for the rest of the night… Netflix and a bottle of wine seemed fitting 😉 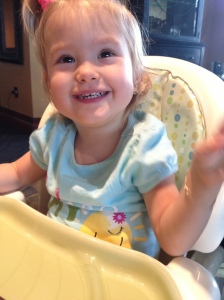 Today is the day we get to have an hour of one-on-one with Anat. I am so excited to see how Mattie responds to her!! I have heard stories from other moms about Anat but I was in no way prepared for what was to come. Jim and I left there feeling like our minds were blown. Anat had a ton of great insight on me and Mattie in just the first few minutes of meeting us. She thinks I help Mattie too much and talk for her (which I do) but to have someone who does not know me point it out made it clearer in my mind just how much I assumed I knew what Mattie wanted. At first when a yes/no question was posed to Mattie she would look at me to make a decision for her. When I would not do it, she seemed confused as though she had no idea how to respond since we never ask her what she wants. It was really eye opening. The first part of the hour was spent with Anat working on Mattie and the last 20 minutes was more for Jim and I. By the end of the hour Mattie was answering yes or no to everything. It was pretty incredible. I did feel like it was more of a psychological session with Jim and I more than a movement lesson with Mattie. It is going to take some time to wrap my mind around what was said. I hope that the Thursday session with Anat is more focused on Mattie’s movement.

Our only day off! We decided to head to the golden gate bridge and walk across it. It was raining so the pics we took were not great but it was pretty cool. Later that afternoon we headed to a winery near Napa. Jim and I both love wine so we were excited to visit a real winery. It was still raining so we were a little bummed about that but we all had fun. Even Mattie! 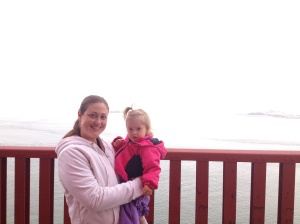 Today’s session with Anat was amazing! It might have been the best ABM session Mattie ever had. Anat made it a point to really push Mattie to show just how capable she is. She had Mattie doing all sorts of new things, from pulling to stand, to twisting her body by using her lower back. It was great to see Mattie responding so well and it was obvious she liked showing off her new abilities. Anat thinks Mattie has immense potential (there’s that word again!) and it was very encouraging to hear that we are on the right path. 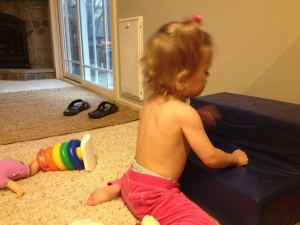 Mattie is burned out. We knew that 10 sessions would be pushing her but we thought with a day off in between that she might have been able to handle it. Ummm not so much. Take a look at those eyes.

She is fried!!! Today’s sessions were not fantastic but Mattie was still a trooper! Overall I am very happy with small changes we are seeing in Mattie. She is holding her back up straighter and talking a ton more. She has learned to answer yes and no for what she wants. She has been great this entire trip. I could not be more proud of her.

We leave to go back home today. I think we are all ready to get back. I have missed Joba more than words can even describe. Joba stayed with my sister for a week and then with his grandma’s the rest of the time. He did really well while we were gone. I do know that I can never leave him for that long again. Every time I talk to him or Skype him, my heart hurts knowing how far away we are from each other.

Anat and the practitioners at the ABM Center believe Mattie is on the verge of a break through and want to see Mattie back in California every 3 weeks for the next 3 months. As much as I wish it was possible, we just can’t afford to come back that soon or even in the next 3 months. I really feel like this trip was a success but at the same time I am left feeling anxious and guilty that we can’t follow the plan they want for Mattie. It really is an unrealistic plan but I am still racking my brain on how we could get back sooner rather than later. We have come up with the best alternative plan that is doable for now. We have decided to go to Gainesville every 3 weeks for 6 sessions of ABM and continue to see our Sarasota ABM practitioner in between.

Today
We have been back for a little over 2 weeks now and until yesterday I had no real progress to report on Mattie. I know that Mattie needed time to process everything she learned in Cali. So the past few weeks have been relaxed for her with no travel and lots of playing on the floor time. Then (drum roll please) Sarah, Mattie’s super fantastic nanny, says that Mattie used her ARMS to move FORWARD all by herself. So, you may not think this is a big deal, but it REALLY is a HUGE DEAL. Mattie, for the first time ever, moved FORWARD. I am just amazed. I saw it with my own eyes today. I have been crying on and off all day every time I watch the video.

This, my friends, is what I call success. This is why we believe in ABM. This is because of you. Thank you from the bottom of my heart.

A true story of hope, strength, courage and a little girl named Mattie. Mattingly Hope was born April 3, 2011, 9 weeks premature. Prior to that, she grew with little to no ammonic fluid. Her chances of survival were 12%. Through positive thoughts and prayers, Mattie defied all odds and was born 15 weeks after her mom's water broke. At 3 weeks of age Mattie was diagnosed with a brain injury called PVL and at 8 months old was diagnosed with cerebral palsy.

Start here if you are new to Hope for Mattie